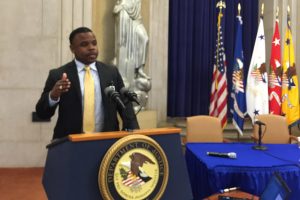 When it comes to credentials and experience, you’ve come to the right place.

As a Beaufort native and standout athlete, Mr. Gibbs is known for being an aggressive yet passionate litigator. Before founding The Gibbs Law Firm, Mr. Gibbs worked as an Assistant U.S. Attorney for the District of South Carolina where he served in the Civil Litigation Unit. In that capacity, Mr. Gibbs served as legal counsel for the United States and its agencies in cases including, but not limited to, defending federal agencies (such as the U.S. Postal Service) in car accidents, defending federal medical facilities (such as the VA Hospital) in medical malpractice actions, and defending federal agencies in premise liability matters. While at the U.S. Attorney’s Office, Mr. Gibbs litigated federal cases throughout various South Carolina District Courts.

Prior to his appointment as an Assistant U.S. Attorney with the Department of Justice, Mr. Gibbs worked as an Associate for a regional insurance defense law firm. While there he gained invaluable experience defending auto accidents, personal injury claims, large-loss trucking accidents, and multi-million dollar class actions. He later went on to accept an offer to serve as Special Counsel to a large law firm based in Pittsburgh.

Mr. Gibbs has experience handling a variety of personal injury cases including car accidents, wrongful death, fractured limbs, and other severe injuries resulting in surgery. He has handled a variety of criminal defense cases ranging from misdemeanors and DUI’s, to major felony charges.

Over the years Mr. Gibbs has tried multiple cases to verdict and gained a knack for the courtroom. He now applies his legal experience to help compensate victims injured due to the negligence of others, as well as assist clients in family court and defend those accused of various crimes.

Mr. Gibbs is deeply rooted in the state of South Carolina; and actively involved in the community. In 2017, South Carolina Governor Henry McMaster appointed Mr. Gibbs to serve on the South Carolina Board of Parole and Pardons. As the Board Member representing the State’s 1st Congressional District, Mr. Gibbs presides over weekly statewide parole and pardon hearings to deliberate and vote on, among other matters, whether to grant or deny parole and pardons, and make recommendations on petitions for reprieves and communications referred by the Governor. Mr. Gibbs is also the founder of Gateway Community and Youth Services, an organization formed to help residents of homeless shelters and at-risk youth gain job placement and learn practical skills.

Mr. Gibbs obtained his Juris Doctor from the Charleston School of Law. He earned his Bachelor of Arts, in English, at The Citadel. While at The Citadel Mr. Gibbs was a member of the football team, Inn of Court (Pre-Law Society), Dean’s List, and was a four-year scholarship recipient and SOCON Academic Honor Roll inductee.